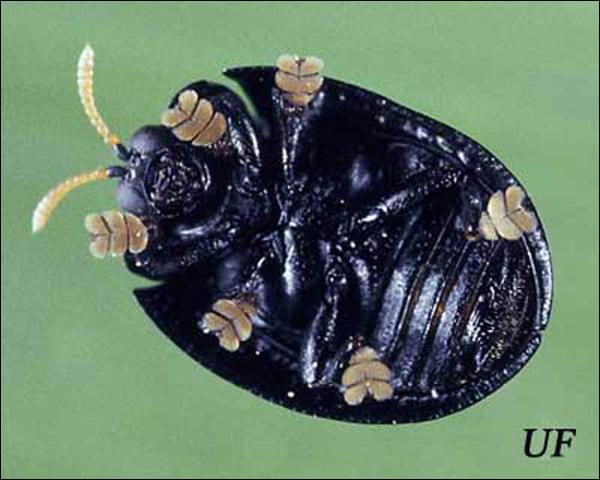 Some beetles reuse their poop by wearing it.
Listen to find out how and why.

If poop serves a useful purpose, then you can’t really call it a “waste product”, right? Some beetles reuse their dung by wearing it for protection.

The palmetto tortoise beetle does look sort of like a tortoise, with its domed back and flat belly pressed against a leaf. When it’s young, though, crawling around as a larva, it looks more like a tangle of tiny sticks. Or maybe like a big, heavy, looped string of tiny linked sausages. It seems to wear something like a giant straw hat of feces that hides its entire body. 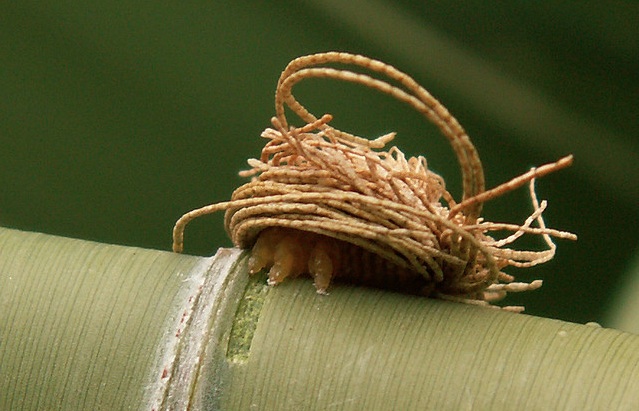 And that’s the whole point! Dangerous enemies can’t get past the wall of poop that the beetle larva built for itself. The tortoise beetle uses its telescoping anus to spool its dried poop in coiled layers over the top of its body. It can point its anus in different directions to build the most effective wall of poop between itself and the dangers of the world.

For other beetles, too, their feces don’t just plop out as wastes. Some beetles create fecal shields, which they hold on their butt and can position in the direction of an attack. Sometimes the poop shield is toxic, because of the chemicals in the beetles’ food plants. 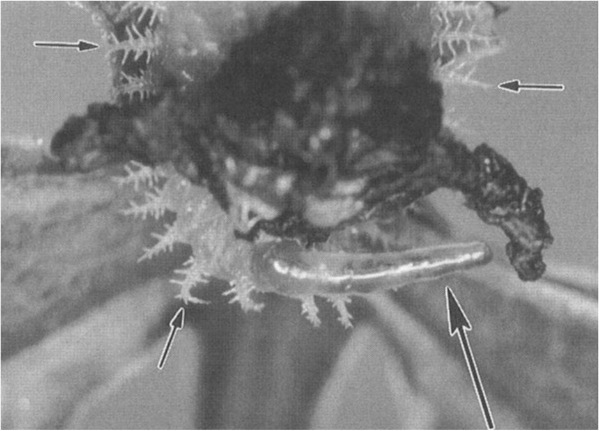 The defense is even more effective when social beetles respond to attackers by forming a tight circle–heads in the center, butts on the outside–holding up all of their fecal shields. Attackers can’t get past the solid blockade of toxic poops.

For these beetles, poop serves them well through most of their lives. Even as eggs, the beetle babies are protected by their mother’s poop. The momma defecates on her eggs; the crusty poop shell resists predators and may camouflage the babies. 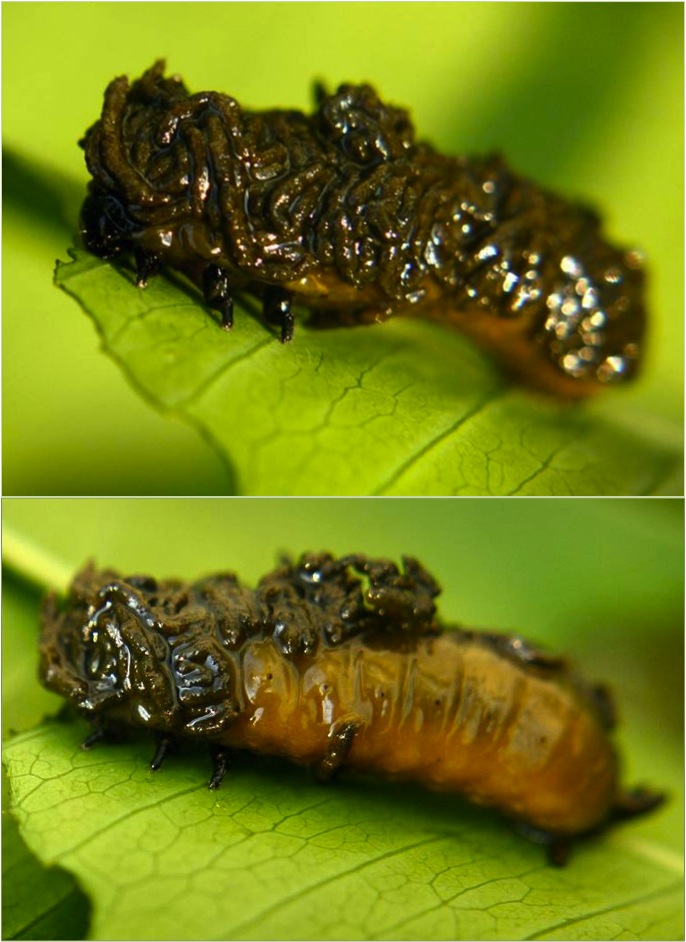 Now, I don’t necessarily think that you should wear a poop hat, nor that it’s good advice to hide behind your excrement or to use it as a weapon. Butt–these beetles teach us the utility of recycling! Recycle as much as you can. It’s not waste when it’s useful.

And hug a bug. You can wash your hands later. 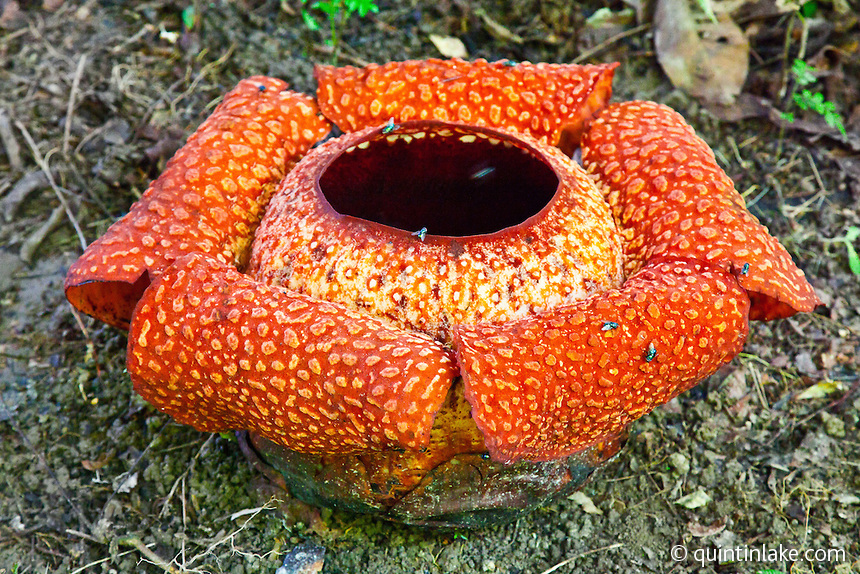 The biggest flower in the world smells like a rotting corpse, which attracts the flies that pollinate it.
Listen to find out how and why.

Imagine the fragrance of a dense jungle full of colorful flowers. Now imagine the smell of death. That’s the stench of the biggest flower in the world. It’s called Rafflesia, and it smells like a rotting corpse. 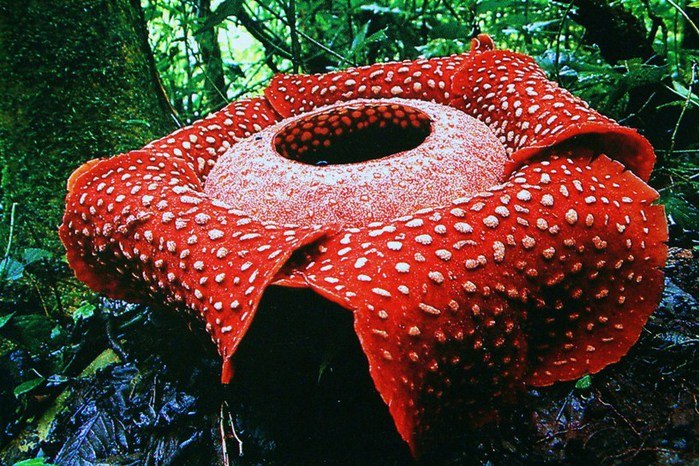 Rafflesia depends on flies for pollination. Yet Rafflesia does not reward its pollinators for the favor. No, it fools flies into visiting by mimicking the stench, appearance, and even the temperature of a rotting animal carcass.

The Rafflesia flower is so big that you really could stumble on it as you hike through Sumatra or the Philippines. It’s huge–3 feet across, from petal to petal. Perhaps even big enough to resemble the body of a dead animal. Some other stinky species have hairy petals, which looks deceivingly like mold or fur. Rafflesia flowers even generate heat! Higher temperatures help to volatilize the odors so the pungent aromas can waft through the forest and attract distant flies. The flower’s heat also may feel like a steaming pile of excrement or a warm dead body. 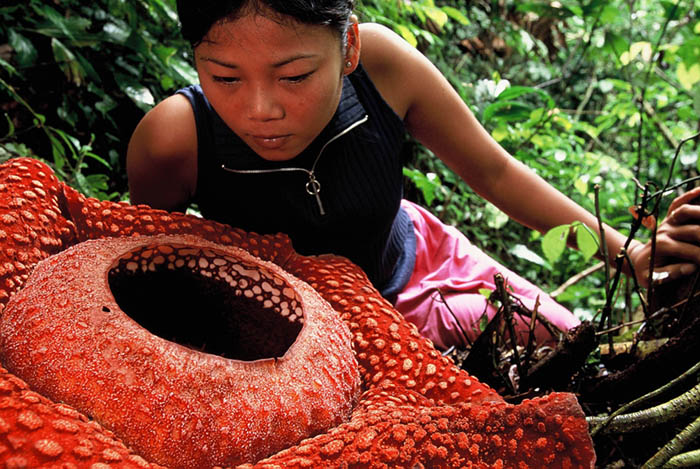 And the flies, they come. They’re attracted to the flower that smells, looks, and feels like a good place to eat and lay their eggs. These flies are foolish, or desperate, or bound by instinct, and relegate their maggot babies to a short life of starvation–because the maggots find themselves not in the rotting meat of an animal, but instead on a flower that’s inedible. The baby flies that hatch on Rafflesia cannot survive.

But the unfortunate flies have pollinated the putrid Rafflesia flower, which now can make malodorous babies of its own. 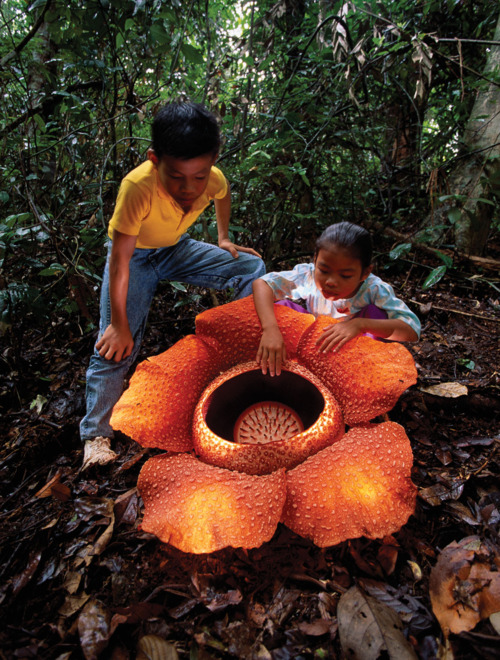 You know what’s strange is that it seems fairly common for cadavers and cheese to share odors. In the case of cheese, people exploit pregnant flies and their maggot babies. There’s this cheese from Sardinia–casu marzu–that tastes delicious because of the flies that lay their eggs in it. The maggots eat the cheese, digest it, and poop it out, helping to create the soft, leaky delicacy. You’re advised to eat it, maggots and all, while the bugs are still alive.

So next time you’re in the jungle, and you spot the rare and beautiful (but awful-smelling) Rafflesia flower…or when you have a taste of that wriggling Italian cheese…Thank a fly. Hug a bug.

Elsewhere in the world and on the internet:

The titan arum is another magnificently beautiful and gigantic flower that emits a characteristically fetid stench.

The “stink lily” is an edible (by humans) tuber that also smells disgusting (to humans). Here is an illustrated account of a manual pollination attempt, replete with a dog wearing a gas mask.

It’s the bug inside that makes a jumping bean jump.
Listen to find out how and why.

The worm in your bottle of tequila (mezcal, actually) is not the only worm that you’ll find in souvenirs from Mexico. Check your jumping beans, too.

I’ve only ever gotten jumping beans from toy stores, but you could find them for yourself in the Mexican desert. There is where jumping beans jump.

1. A jumping bean is not a bean. It’s a seed capsule on a shrub that is toxic to humans. The plant has been used by people to poison the tips of arrows. 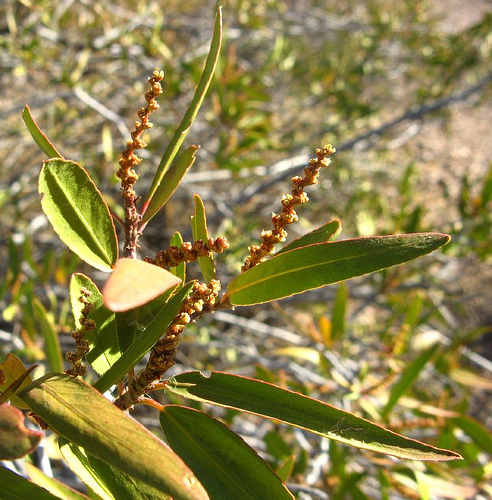 2. The worm inside a jumping bean (sort of like the one in your bottle of mezcal) is not a worm. It’s an insect larva, a baby bug, that goes through metamorphosis and becomes a moth. It’s the bug inside that makes the jumping bean jump. 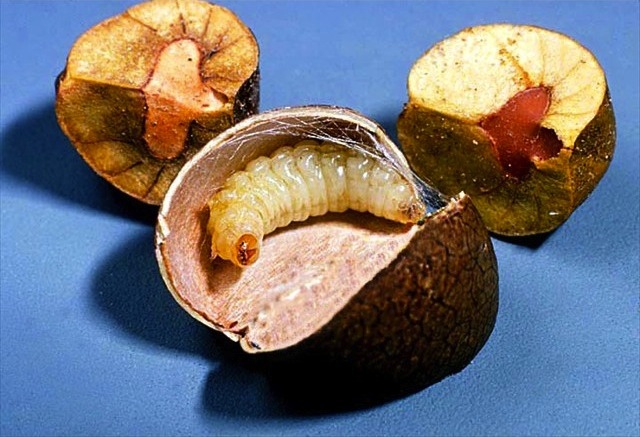 Put it under a warm lamp or the sun, or in your fist. Whatever makes the bean hot makes it hop. At higher temperatures, the larva grips the wall of the seed capsule, bends its body, and snaps back, slamming its head against the wall. That’s how it moves its hollow little house out of the hot desert sun and into the safety of shade.

When I was a kid, I thought jumping beans broke after a while, like any other toy. The beans would stop jumping. But it’s not like the bug in the bean is broken. The bug probably is not dead. Just the opposite–the bug is growing.

The larva settles down as it plans for the future. It uses its mandibles to chew the outline of a doorway in the seed capsule that fed and protected it. The door is pre-cut, almost as a perfect circle, and it stays closed during metamorphosis, reinforced with woven silk from the larva. This is the escape hatch for the post-metamorphosis moth.

When it’s ready, the moth head-butts the wall one last time, leaving you and your jumping bean behind.

from Riley 1882 (Proceedings of the United States National Museum)

Now you do the hopping–across the border, through the Mexican desert, to a toxic shrub. Grab a jumping bean. Hug a bug.

Enjoy this trip of a short silent film, which begins with jumping beans and goes off on a wide tangent.