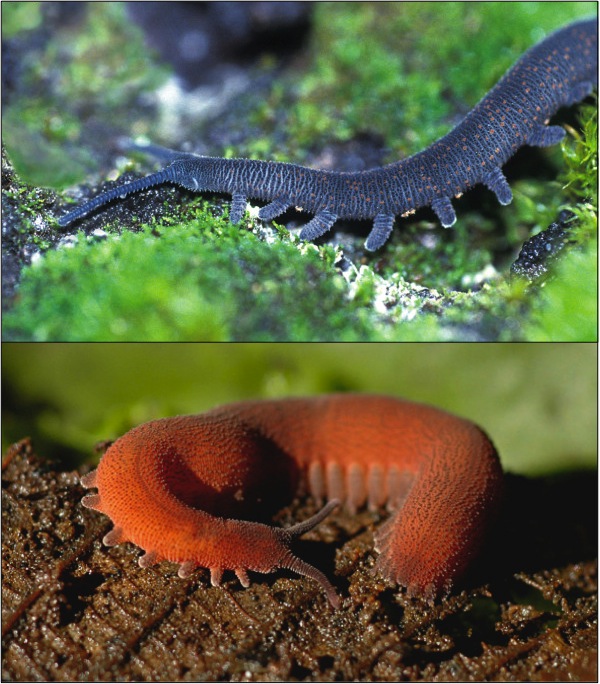 Velvet worms do it headfirst.
Listen to find out how and why.

A velvet worm is not really a worm. It’s not quite an insect, either. By any measure, velvet worms occupy their own special category of little creatures. If you find one in the dark, moist crevice of a rotting log, you might think it looks like the love child between an earthworm and centipede that was made into a stuffed animal. 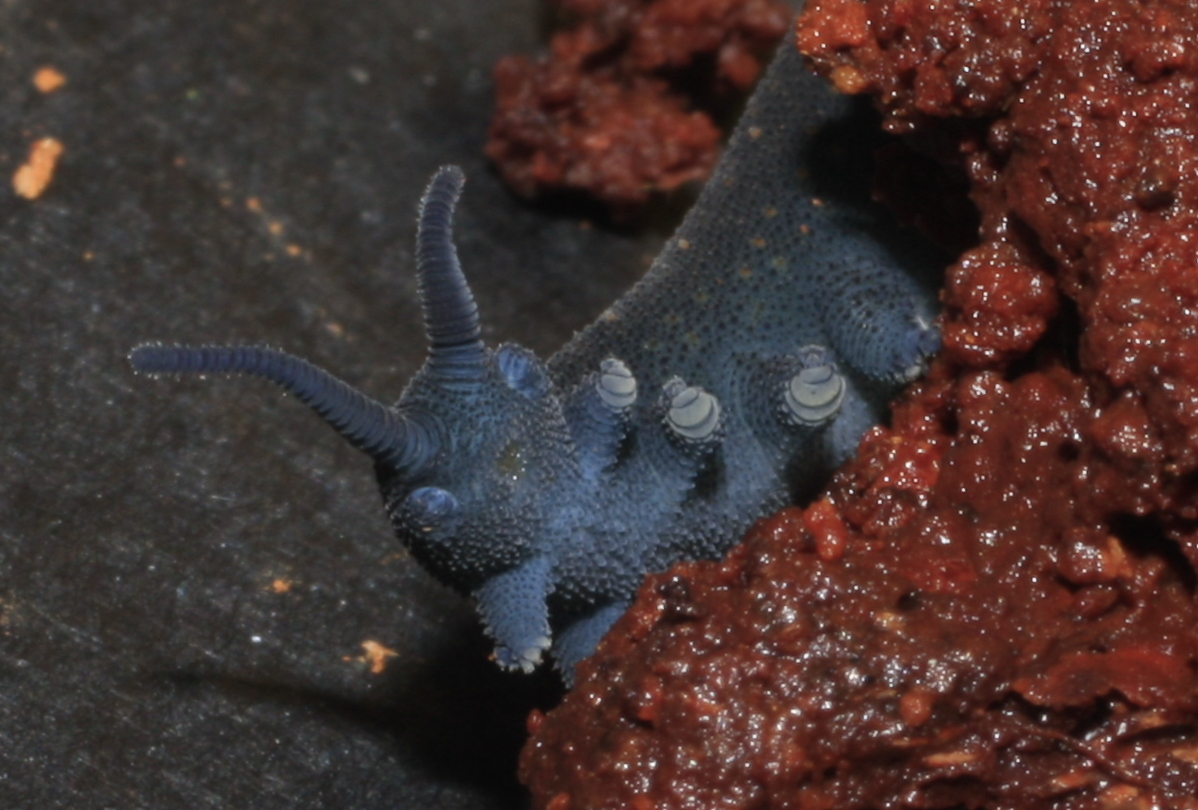 Under a microscope, you’ll see something different. Check for spikes or other unusual features, like claws or tusks, on the heads of the males. Even what looks like a pit between their antennae can flip inside-out to reveal something like a thorn on their forehead. 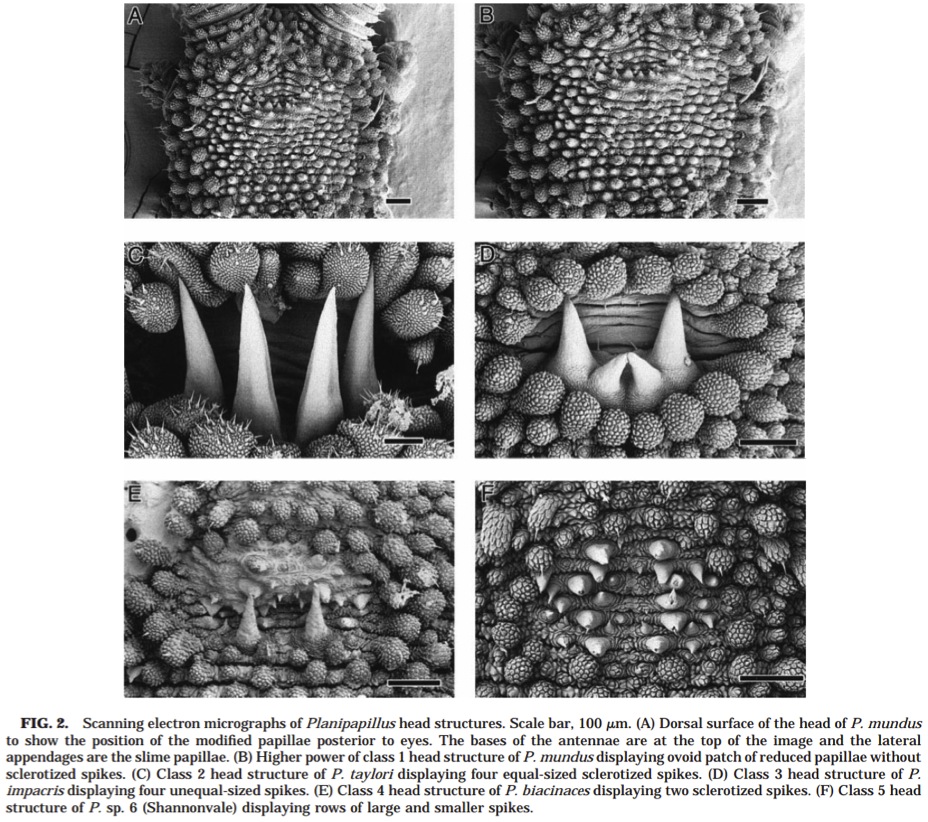 Above: from Tait & Norman 2006 (Journal of Zoology)
Below: from Rockman et al. 2001 (Molecular Phylogenetics and Evolution)

Only males carry extra anatomy on their heads. Which raises the question: Do those head structures have something to do with gettin’ some?

The answer is yes. Velvet worms have at least two unparalleled methods of sex.

The first involves going in headfirst. Lord only knows how a male gets sperm from one end of his body to the other, but he does. He makes himself a sperm hat, then approaches a female and pushes his head into her vagina. He’s wedged securely, and the female keeps his head steady with her feet.

The second mode of copulation involves neither the head nor the vagina of a velvet worm. We’re talking insemination through the skin.[1] Here’s what happens–one or several males place one or several sperm packets on a female velvet worm’s skin, all over the place. On her back, her sides, anywhere along the length of her body. The female’s own cells dissolve her skin under a ball of sperm, and a blister forms there. The bursting blister tears her skin and the sperm packet. The sperm swim into the female through her muscle, her tissues, her blood, eventually reaching her ovaries.

The beautiful part of this process is that the empty sperm packet sticks to the female over the wound that formed in her skin; it’s like a natural band-aid. Her body heals the hole, and the next time she sheds her skin to grow, she’s good as new. And pregnant. 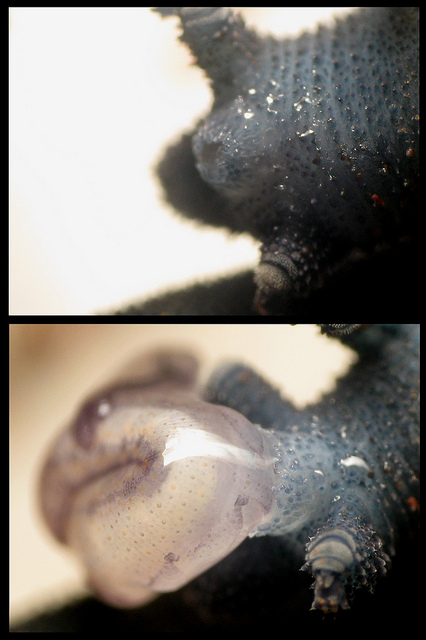 Thanks to Andras Keszei for sharing the image

By the way, some velvet worms may not even need a guy’s help to have babies. But that’s another story.

For now, tip your sperm hat to these innovative velvet worms and their creativity when it comes to sex. I hope this gets you in the mood. 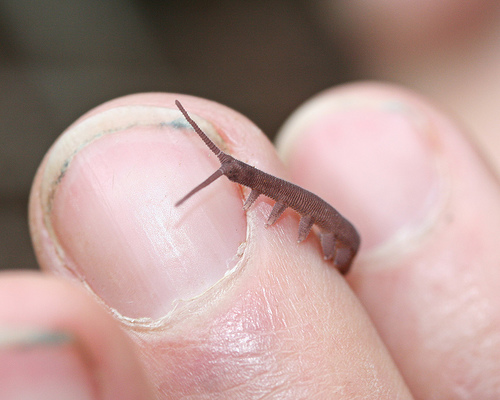 All that, not to mention the gooey cannons used by velvet worms to hunt:

After a bit of perambulating with its “soft, slumpy legs”, the velvet worm entangles prey with glue shot from the modified legs on its face, and then “reclaims its glue by eating it.” from Mr. Attenborough

Mesmerizing mini-videos (a.k.a. gifs) of the sticky cannons from F@#$ Yeah! Biology! 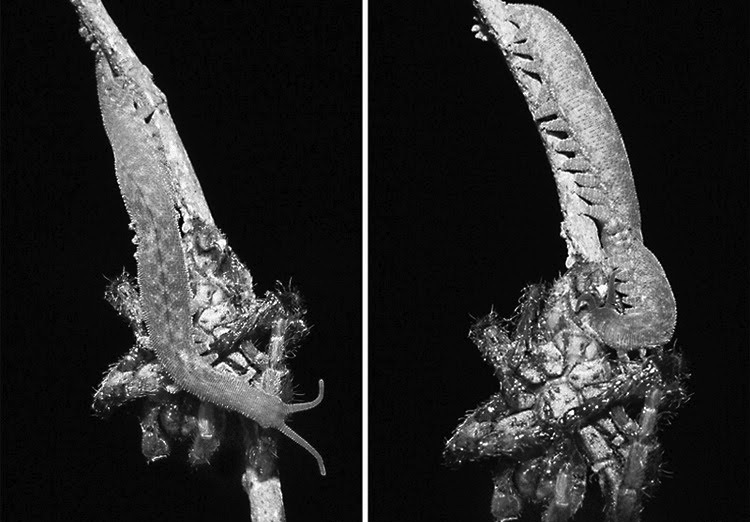 Furthermore, these videos do not depict that some velvet worms hunt in groups. And we didn’t even talk about the female-dominated social hierarchy of some velvet worms, where an “alpha female” gets the privilege of nomming all by herself. When she’s finished, other females pick apart the carcass. Finally, male worms are allowed the scraps.

Something like 200 different velvet worm species crawl all over the world using their little hydrostatic-powered legs. mm, diverse-looking.

[1] ^ A detailed description of dermal-haemocoelic insemination, in all its jargony glory, with BONUS untranslated French and German excerpts: Manton 1938 (Philosophical Transactions of the Royal Society B)

This entry was posted in 03 - March, hugabug. Bookmark the permalink.