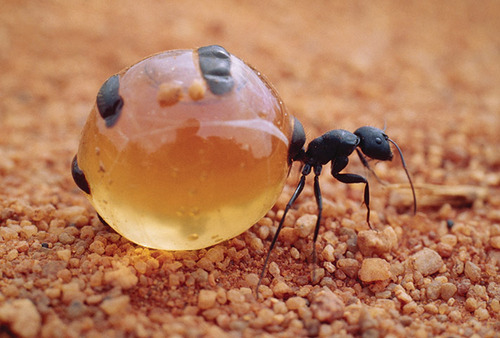 The honeypot ant has junk in her trunk.
Listen to find out how and why.

If you walk past a honey ant colony, you probably won’t notice it at all, because the only evidence of its existence is a small hole in the ground, which is surrounded by tiny dry clods of dirt or sand. If your scientific eye does spot the honey ant colony, though, you probably won’t notice anything different about most of the honey ants…unless you dig several feet under the hard-packed desert ground.

There, you’ll find hundreds of amber globes dangling from the domed roof of the nest, light from the hole you dug glistening in the hanging orbs. Wait a minute–those globes are dangling ant asses. 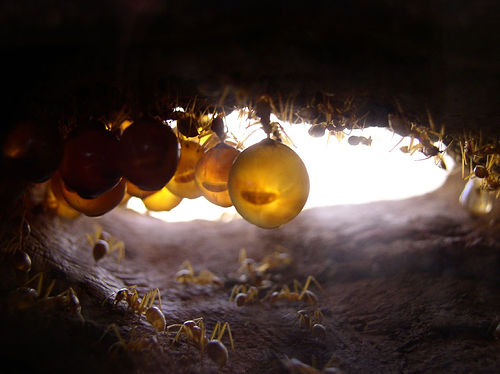 The honeypot ant has junk in her trunk.

Honeypot humong-asses grow to be the size of grapes or cherries, which is like a 2-year-old child having a butt the size of a refrigerator. And that’s exactly what these honeypots are: living refrigerators.

Honey ants live in dry areas around the world (usually deserts), in Australia, Mexico, South Africa, Arizona, Utah, California, Colorado. The lifestyle in a desert can be summed up pretty simply–feast and famine. During feast times (like the rainy season, when plants are growing and food is plentiful), ants have access to more food than they can eat.

Everyone knows that the good times don’t last forever, so worker ants plan ahead by bringing extra food to the nest. There, extra food can be stored for times of drought and famine. Stored right there in the humong-asses of live honeypot ants. 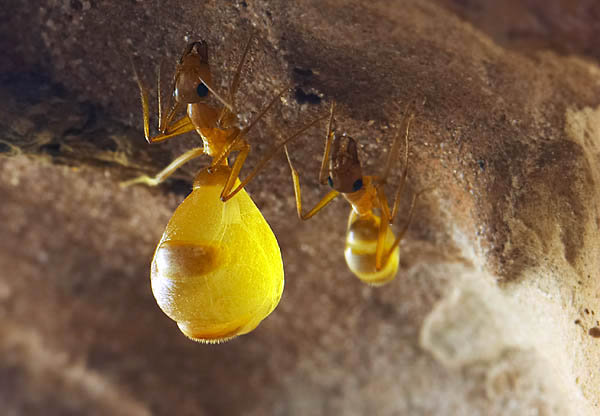 The sweet sweet junk in her trunk.

Worker ants in the colony tap these delish-asses when resources are scarce. The honeypot regurgitates what’s in her butt into the mouth of a hungry ant friend.

Two regurgitations actually have to happen so that food can be stored and retrieved with the honeypots. First, a worker collects nectar or animal guts from aboveground and returns to the nest to vomit the goods into a honeypot’s mouth. Next, when food is scarce later in the year, the honeypot vomits up the stored food–drop by delicious drop–into a hungry supplicant’s mouth.

The junk in a honeypot trunk might really be junk, in a sense. Sometimes worker ants harvest the guts, fats, and body fluids from worms and other scavenged animals. Most often, though, honeypots contain the sweet stuff, like nectar from flowers, fruits, and extrafloral nectaries, or the sugars produced by aphids, galls, and scale insects.

A honeypot has one function–to serve as a living refrigerator–so she has license to do nothing but dangle from the roof of the nest and sleep all day long, while her backside becomes oversize.

Sweet nectars last in her delish-ass storage space because the honeypot digests barely any food. Turns out that being lazy and dangling requires very few calories. 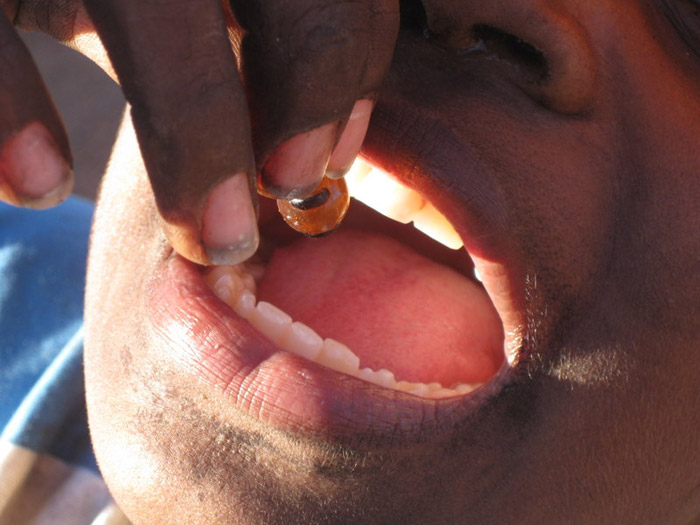 The nectars are so delish-ass that people eat them. Raw. You can pinch one by the head and legs, bite her butt off, and let the sweet nectar dribble into your mouth.

Australian Aborigines exhume the honeypots to satisfy their sweet tooth. During the Spanish conquest of Mexico, honeypots were sold individually in the markets of Mexico City. Honeypot nectar used to be fermented into an alcoholic drink. Badgers, coyotes, and other animals eat honeypots, too. In fact, other ant colonies sometimes raid honey ant nests and kidnap the honeypots! I wonder how the honeypots feel about imprisonment…

Like many other things in nature, once the function of a honeypot has been fulfilled, she becomes unnecessary. disposable. obsolete. In this case, when the nectar is drained from an enormass by hungry nestmates, the shrunken, withered butt never recovers, and the shriveled honeypot dies.

With that in mind, hug a bug, would you? 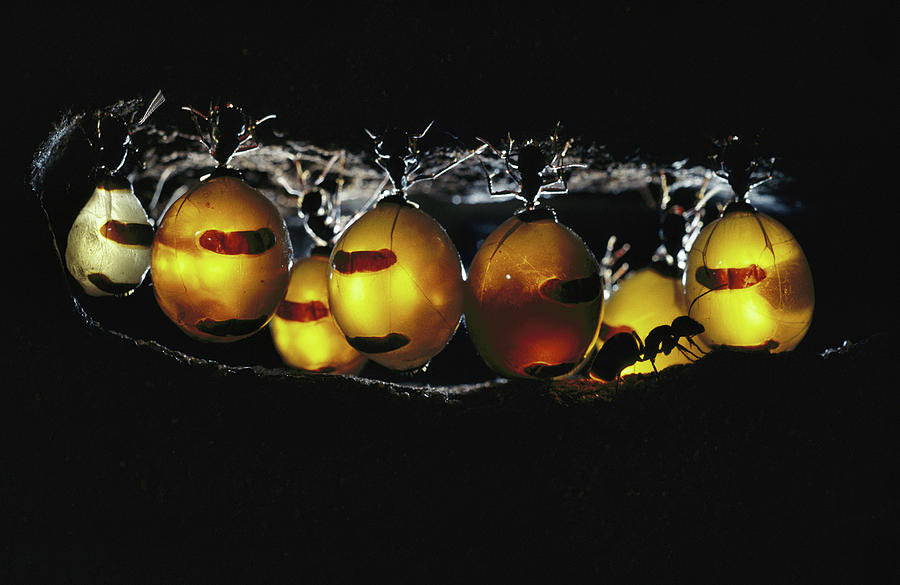 Worth checking out around the internet:

An adventure in pictures–a filmmaker finds honey ants in the Arizona desert.

This entry was posted in 02 - February, 2013, hugabug, LISTENER-APPROVED. Bookmark the permalink.